END_OF_DOCUMENT_TOKEN_TO_BE_REPLACED

The story of Bilikisu Sungbo is one that draws the attention of both locals and foreigners to a village called Oke Eri in Ijebu Ode, Ogun state. Pilgrims from all over the world have been said to come to Oke Eri village where they believe Bilikisu Sungbo is buried.

The Sungbo Eredo  is a system of defensive walls and ditches said to have been commisioned by Bilikisu who was believed to be a wealthy queen and complexly built in 1000 CE. Although, it has been covered by forest, it was described as Africa’s largest single monument, with more earth and rock used to make the wall than was used in the Great Pyramid. END_OF_DOCUMENT_TOKEN_TO_BE_REPLACED

Although the djew hieroglyph did portray the mountain ranges the Egyptians saw in their everyday lives, it also was a visualization of their cosmic beliefs. Symbolically, the “mountain” was an image of the universal mountain whose two peaks were imagined to hold up the sky. The eastern peak was called Bakhu, to the west was Manu. The ends of this great mountain were guarded by two lions who were called Aker. Aker was a protector of the the sun as it rose and set each day. END_OF_DOCUMENT_TOKEN_TO_BE_REPLACED

Like the European enslavers, the African people came from different societies and tribes, each having their own dialect, language and culture. Haitian Vodou or Voudun consists of 21 Nations or Nasyons of Lwa – what Dominicans call los Loases or Misterios de La 21 Divisiones (also known as Budű or Vudű Dominicano.) END_OF_DOCUMENT_TOKEN_TO_BE_REPLACED Regardless Vudu is an influential Dominican subculture and religion. But due to historical, racial and cultural pressures Vudu morphed into Las 21 Divisiones and became more acceptable to the Dominicans who practice it. Even so, Las 21 Divisiones, is still looked upon with suspicion by some in the Dominican END_OF_DOCUMENT_TOKEN_TO_BE_REPLACED

The chupacabra is (supposedly) alien in origin and was brought here by a UFO. It is a living creature that looks like a hunched alien with a line of sharp spikes down the middle of it’s back exactly where the spine is located. It has gray skin that is part fur and part feathers. It has short arms ending with long nasty claws. Its legs are like a kangaroos.
The chupacabra is said to be about 4 feet tall when standing erect. This gray being has huge red elongated glowing eyes, the better to see you with. They are said to be very powerful and people have reported seeing the chupacabra fly.

Creatures fitting this description were said to be spotted first in Puerto Rico in the mid-1990s. Then, a few years later, the chupacabra started showing up in Mexico, South Florida, Central America, and South America including Dominican Republic. Although few people have actually claimed to seeing a real chupacabra many claim to have seen the works of this blood sucking alien being. END_OF_DOCUMENT_TOKEN_TO_BE_REPLACED

Merit Ptah (“Beloved of the god Ptah”; c. 2700 BCE) was an early physician in ancient Egypt. She is most notable for being the first woman known by name in the history of the field of medicine. Her picture can be seen on a tomb in the necropolis near the step pyramid of Saqqara. Her son, who was a High Priest, described her as “the Chief Physician.”

The physician Merit Ptah should not be confused with Merit-Ptah, the wife of Ramose, the Governor of Thebes and Vizier under Akhenaten, who is depicted with her husband in TT55 in Sheikh Abd el-Qurna. 1 Joshua the son of Nun secretly sent two men out of Shittim as spies, saying, “Go, view the land, including Jericho.” They went and came into the house of a prostitute whose name was Rahab, and slept there.
2 The king of Jericho was told, “Behold,* men of the children of Israel came in here tonight to spy out the land.”
3 Jericho’s king sent to Rahab, saying, “Bring out the men who have come to you, who have entered into your house; for they have come to spy out all the land.”
4 The woman took the two men and hid them. Then she said, “Yes, the men came to me, but I didn’t know where they came from. 5 About the time of the shutting of the gate, when it was dark, the men went out. Where the men went, I don’t know. Pursue them quickly. You may catch up with them.” 6 But she had brought them up to the roof, and hidden them under the stalks of flax which she had laid in order on the roof. 7 The men pursued them along the way to the fords of the Jordan River. As soon as END_OF_DOCUMENT_TOKEN_TO_BE_REPLACED Deriving its name from the root shenu (to encircle), it was almost always a symbol of eternity. However, the shen ring also held the idea of “protection.” It most often carried this connotation when seen in its elongated variation, the cartouche; which surrounded the birth and throne names of the Pharaohs. END_OF_DOCUMENT_TOKEN_TO_BE_REPLACED 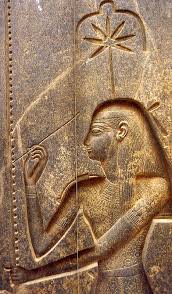 Hence literature in ancient Kemet was common and varied in its form. Sometimes it was on papyrus and at other times it was carved/engraved in stone (c. 2700 B.C.) on the walls of temples (library‑universities), pyramids, and other monuments (Nichols, 1964, 32). Fortunately, works written in stone have survived, to provide unequivocal evidence of an extensive Kemetic tradition.7 END_OF_DOCUMENT_TOKEN_TO_BE_REPLACED