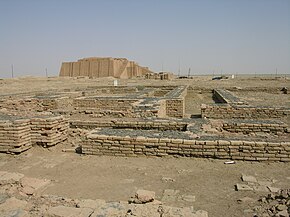 The city dates from the Ubaid period circa 3800 BC, and is recorded in written history as a City State from the 26th century BC, its first recorded king being Mesh-Ane-pada. The city’s patron deity was Nanna (in Akkadian, Sin), the Sumerian and END_OF_DOCUMENT_TOKEN_TO_BE_REPLACED

The latter was a favorite theme of the Haggadists (Pesiḳ. R. vi.; Soṭah 48b; Giṭ. 68a). The later Haggadah ascribed to Moses this power to END_OF_DOCUMENT_TOKEN_TO_BE_REPLACED

as spirits animating all elements of life and inhabiting all parts of the world, have their place in the primitive belief of all tribes and races. When certain deities rose to be the objects of regular worship and became the rulers of the powers of life, demons, or spirits, were subordinated to them. But inasmuch as they were still feared and occasionally worshiped by the populace, they became the objects of popular superstition. END_OF_DOCUMENT_TOKEN_TO_BE_REPLACED

The Seventy-Two Return with Joy
17 The seventy returned with joy, saying, “Lord, even the demons are subject to us in Your name.” 18 And He said to them, “I was watching Satan fall from heaven like lightning. 19″Behold, I have given you authority to tread on serpents and scorpions, and over all the power of the enemy, and nothing will injure you.… END_OF_DOCUMENT_TOKEN_TO_BE_REPLACED

LUCIFER (light-bearer), found in Isaiah. 14:12, coupled with the epithet “son of the morning,” clearly signifies a “brightstar,” and probably what we call the morning star. In this passage it is a symbolical representation of the king of Babylon in his splendor and in his fall. Its application, from St. Jerome downward, to Satan in his fall from heaven arises probably from the fact that the Babylonian empire is in Scripture represented as the type of tyrannical and self-idolizing power, and especially connected with the empire of the Evil One in the Apocalypse.

Lucifer in Isaiah 14 is an appellation referring to the King of Babylon. I presume you will look at the above references in their complete context. Once you do you’ll find many of the above quoted commentaries and dictionaries go on to state that although this reference to Lucifer is referring literally to the fallen or falling King of Babylon, the metaphor is still referring to “Satan.” In light of the concept of “satan” which means adversary, opposer or accuser, one is adding to Scripture by applying a meaning of a literal Satan to the term. END_OF_DOCUMENT_TOKEN_TO_BE_REPLACED Tiamat made weighty her handiwork,
Evil she wrought against the gods her children.
To avenge Apsu, Tiamat planned evil,
But how she had collected her forces, the god unto Ea divulged.
Ea harkened to this thing, and
He was grievously afflicted and he sat in sorrow.
The days went by, and his anger was appeased,
And to the place of Ansar his father he took his way.
He went and, standing before Ansar, the father who begat him,
All that Tiamat had plotted he repeated unto him, END_OF_DOCUMENT_TOKEN_TO_BE_REPLACED

When in the height heaven was not named,
And the earth beneath did not yet bear a name,
And the primeval Apsu, who begat them,
And chaos, Tiamut, the mother of them both
Their waters were mingled together,
And no field was formed, no marsh was to be seen;
When of the gods none had been called into being,
And none bore a name, and no destinies were ordained;
Then were created the gods in the midst of heaven,
Lahmu and Lahamu were called into being… END_OF_DOCUMENT_TOKEN_TO_BE_REPLACED

Africa, Egypt, Mesopotamia, Which Babylon May 30, 2013 Leave a comment

Babylon was the dominant city of Mesopotamia. The name was linked to the Pr-Hapi-n-Iwnw (Nile house of Heliopolis) in Kemet, the dwelling of deity Hapi in Heliopolis city. Heliopolis lay northeast of Memphis, near the commencement of the Pharaonic Canal, connecting the Nile to the Red Sea.

Babylon Fortress was an ancient fortress city or castle in the Delta of Egypt, located at Babylon. It was at the boundary between Mesopotamia and Lower Egypt.

Diodorus ascribes the erection of the first fort to rebel Assyrian captives in the reign of Sesostris, and Ctesias (Persica) dates it to the time of Semiramis. The first fort was built by the Persians in about the 6th century BCE. When the Romans took possession of Mesopotamia and Lower Egypt, END_OF_DOCUMENT_TOKEN_TO_BE_REPLACED