The constellation Ophiuchus the “Serpent holder” [thus S-Ophi-Isis. 7M] sits 180 degrees across Orion (Ausar). Face one you face the galactic center, face the other you have your back to the galactic center. Ophiuchus sits in the direction towards the center of our galaxy. The ancients called it the ‘Gate of the Gods’. Orion (Ausar) sits in the opposite of this direction, which would be considered the ‘anti-galactic center’ and the ancients called this direction, the ‘Gate of man’. END_OF_DOCUMENT_TOKEN_TO_BE_REPLACED

END_OF_DOCUMENT_TOKEN_TO_BE_REPLACED

“The living are not at the mercy of the dead ; the shades are without force and without consciousness. There are no ghostly terrors, no imaginings of decomposition, and no clatterings of dead bones ; but equally there is no comfort and no hope. The dead Archilles brushes aside Odysseus’ words of praise, saying : ‘Do not try to make light of death to me ; I would  sooner be bound to the soil in the hire of another man, a man without lot and without much to live on, than ruler over all the perished dead.’ In the dreary monotony everything becomes a matter of indifference.” – Burkert, 1985, p.197.

Elsewhere, the crucial difference between Egyptian and Greek initiation and religion came to the fore.

In the Greek mysteries, the afterlife was depicted as a realm of shadows and any hope of individual survival was deemed ephemeral. Nobody escaped destiny, except the deities and the lucky few elected. The latter “escaped” from the world and its sordid entropic fate, misery and possible “eschaton” : a world-fire invoked by these wrathful deities themselves, unforgiving of man’s tragi-comical sins, but able to recreate the world in a whim ! Escape from this fated comedy was offered through the mysteries. END_OF_DOCUMENT_TOKEN_TO_BE_REPLACED

Osiris is heir to the throne of Geb, and so the king of the Two Lands.

“Geb’s heir (in) the kingship of the Two Lands. Seeing his worth, he gave (it) to him. To lead the lands to good fortune. He placed this land into his hand. Its water, its wind, its plants, all its cattle, all that flies, all that alights, its reptiles and its desert game. (All that) were given to the son of Nut, and the Two Lands are rejoicing !” – Great Hymn to Osiris, New Kingdom, stela C286 – Louvre.

Two wooden barks were found near the Great Pyramid of king Khufu. They were used by the deceased king in the netherworld. Ferried over to the eastern horizon, he would arrive in the First Time of the gods. Indeed, in the lightland of the horizon, the transformation (“kheper”) from soul (Ba) to spirit (Akh) took place. After being transformed in the horizon, Pharaoh arrived in heaven as a god. END_OF_DOCUMENT_TOKEN_TO_BE_REPLACED

The legend of Osiris is told in various ways, but we possess no complete tale. The Egyptians themselves only alluded to the assassination and probably conceived the sequence of events as a form of sacred history.

Most narratives go back to De Iside et Osiride of Mestrius Plutarch (ca. 45 – 120 CE), an initiate of the mysteries of Apollo. He stressed the connection between the myth of Osiris and the inundation of the Nile and its fertility (cf. agriculture), a reading confirmed by Egyptology, connecting Osiris with popular Predynastic (Lunar) vegetations rituals (the “Bull” as consort of the great cow goddess of the Moon ?). The “Golden Age” or “age of the gods” could therefore reflect some of the events of the period of the formation of the two kingdom (the Late Predynastic Period, ca. 3600 – 3300 BCE, or the Gerzean culture of Naqada II and the Terminal Predynastic Period, ca. 3300 – 3000 BCE). In these last 600 years of prehistory, the role of the male chief, important from the start of agriculture in Lunar-based, nomadic and semi-nomadic societies, increased, and the “good king” became an emblem of power and unity. END_OF_DOCUMENT_TOKEN_TO_BE_REPLACED

“Lord of All Men, at the head of the Two Lands as a whole !
(He) who comes in peace !
Lord of the Blooming of the Heart !”
Hymn to Osiris – stela – XIIth Dynasty – British Museum

“Hail Osiris, son of Nut ! (…)
Whose awe Atum set in the heart
of men, gods, spirits and the dead. (…)
King of gods, great power of heaven,
ruler of the living, king of those beyond !”
Hymn to Osiris – Stela of Sobek-iry – XIIth Dynasty – Louvre

END_OF_DOCUMENT_TOKEN_TO_BE_REPLACED 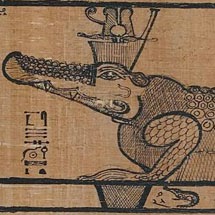 In the hymns in honour of Sobek of Shedet in the papyrus Ramesseum VI of the XII-XIII dynasty (P-1), Osiris certainly is a dead god, the main presence in the crucial moment of the passage of royal power from him to his son. Here, Sobek-Horus is described while he looks for the scattered body of his father Osiris and performs for him the rituals necessary to his resurrection. In this way, Sobek-Horus can finally become king of KMT: END_OF_DOCUMENT_TOKEN_TO_BE_REPLACED