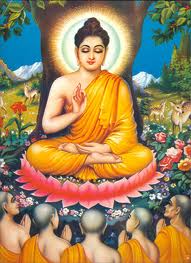 The Vinaya Piṭaka is made up of rules of discipline laid down for regulating the conduct of the Buddha’s disciples who have been admitted into the order as bhikkhus (monks) and bhikkhunis (nuns). These rules embody authoritative injunctions of the Buddha on modes of conduct and restraints on both physical and verbal actions. They deal with transgressions of discipline, and with various categories of restraints and admonitions in accordance with the nature of the offence.

The offences for which penalties are laid down may be classified under seven categories depending on their nature:

(1) Pārājika
An offence in the first category of offences (pārājika), is classified as a grave offence (garukāpatti), which is irremediable (atekicchā), and entails the removal of the offender from bhikkhuhood.

(2) Saṅghādisesa
An offence in the second category (saṅghādisesa) is also classified as a grave offence but it is remediable (satekicchā). The offender is put on a probationary period of penance, during which he has to undertake certain difficult practices and after which he is rehabilitated by the Sangha assembly.

The remaining five categories consist of light offences (lahukāpatti), which are remediable and incur the penalty of having to confess the transgression to another bhikkhu. After carrying out the prescribed penalty, the bhikkhu transgressor becomes cleansed of the offence.

When and How the Disciplinary Rules Were Laid Down

For twenty years after the establishment of the order there was neither injunction nor rule concerning pārājika and saṅghādisesa offences. The members of the order of the early days were all ariyas, the least advanced of whom was a stream-winner (one who had attained the first magga and phala-i.e. nibbāna), and there was no need for prescribing rules relating to grave offences.

But as the years went by the Sangha grew in strength. Undesirable elements lacking the purest of motives and only attracted by the fame and gain of the bhikkhus began to get into the Buddha’s order. Some twenty years after the founding of the order it became necessary to begin establishing rules relating to grave offences. It was through Bhikkhu Sudinna, a native of Kalanda Village near Vesāli, who committed the offence of having sexual intercourse with his ex-wife, that the first pārājika rule came to be introduced. It was laid down to deter bhikkhus from indulging in sexual intercourse.

When such grave offences occurred, where the laying down of a prohibitory rule became necessary, the Buddha convened an assembly of the bhikkhus. It was only after questioning the bhikkhu concerned and after the undesirability of committing such an offence had been made clear, that a new rule was laid down in order to prevent future lapses of similar nature.

The Buddha also followed the precedence set by earlier Buddhas. Using his supernormal powers he reflected on what rules the earlier Buddhas would lay down under certain given conditions. Then he adopted similar regulations to meet the situation that had arisen in his time.

Admission of Bhikkhunis into the Order

After spending four vassas (residence period during the rains) after his enlightenment, the Buddha visited Kapilavatthu, his native royal city, at the request of his ailing father, King Suddhodana. At that time, Mahāpajāpatī, Buddha’s foster mother requested him to admit her into the order.

After his father’s death, the Buddha went back to Vesāli, refusing the repeated request of Mahāpajāpatī for admission into the order. The determined foster mother of the Buddha and widow of the recently deceased King Suddhodana, having cut off her hair and put on bark-dyed clothes, and accompanied by five hundred Sakyan ladies, made her way to Vesāli where the Buddha was staying in the Mahāvana, in the Kūṭāgāra Hall.

Thus Ānanda made his request again saying that Mahāpajāpatī had been of great service to the Buddha waiting on him as his guardian and nurse, suckling him when his mother died. And as women were capable of attaining the magga and phala insight, she should be permitted to join the order and become a bhikkhuni.

The eight special rules are:

(1) A bhikkhuni, even if she enjoys a seniority of a hundred years in the order, must pay respect to a bhikkhu though he may have been a bhikkhu only for a day.

(2) A bhikkhuni must not keep her rains-residence in a place where there are no bhikkhus.

(4) When the rains-residence period is over, a bhikkhuni must attend the pavāraṇā ceremony conducted at both the assemblies of bhikkhus and bhikkhunis, in each of which she must invite criticism on what has been seen, what has been heard or what has been suspected of her.

(5) A bhikkhuni who has committed a saṅghādisesa offence must undergo penance for a half-month (pakkha mānatta), in each assembly of bhikkhus and bhikkhunis.

(6) Admission to the order must be sought, from both assemblies, by a woman novice only after two year’s probationary training as a candidate.

(7) A bhikkhuni should not insult a bhikkhu in any way, not even obliquely.

(8) A bhikkhuni must abide by instructions given her by bhikkhus, but must not give instructions or advice to bhikkhus.

Mahāpajāpatī accepted unhesitatingly these eight conditions imposed by the Buddha and was consequently admitted into the order.