Allah says when we were in mother wombs were were fetuses: END_OF_DOCUMENT_TOKEN_TO_BE_REPLACED

In Islam, Iblis serves the same function as the Devil, tempting humans to make the wrong spiritual choices. The name Iblis means “despair” or “he who is despaired.” Iblis is also the chief and father of the Djinn. He can assume any form.

Iblis is mentioned nine times in the Qu’ran; seven of the references concern his fall from God’s grace. His other name, Shaytan (Shaitan), or “the deceiver,” , is used in context of his rebellion against God. Sura al-Kahf 18.50 in the Qu’ran states that Iblis “was one of the djinn, and he broke the command his Lord.” As a djinni, Iblis was created by God of smokeless fire. Suras 7.12 and 38.76 refer to his creation from fire.

Why Iblis fell from grace
END_OF_DOCUMENT_TOKEN_TO_BE_REPLACED

The spirit Iblis is a Jinn, which are “mischievous” spirits of earth who reside in a universe parallel to the human world while maintaining the ability to interact in both realms. The Jinn are mortal and powerful spirits whose purpose is to tempt and possess (majnun) humans by creating illusions (ghurur) that familiarize mankind with “the eternal fire” of hell.

The Jinn in their natural state are too horrific for mankind to see, they are highly intelligent, they can END_OF_DOCUMENT_TOKEN_TO_BE_REPLACED

Iblis is the name for the devil in the Qur’an. Although the term “devil” comes from the Greek diabolos, the Muslims derived the name from the Arabic, balasa, “he despaired,” which can be interpreted “despaired of the mercy of God” but he is also al-Shairan, Satan, and “the enemy of God.” The latter aspect of Satan is a commonly shared belief of both Muslims and Christians.

According to one tradition, when Allah ordered the angels to bow down to the newly created man, Adam, Iblis refused to do so because he, being made of fire, thought himself superior to a creature made of earth. He continues tempting humans, especially through the whisper (waswas, “he END_OF_DOCUMENT_TOKEN_TO_BE_REPLACED

And (remember) when your Lord said to the angels: “I am going to create a man (Adam) from sounding clay of altered black smooth mud. So, when I have fashioned him completely and breathed into him (Adam) the soul which I created for him, then fall (you) down prostrating yourselves unto him.” So, the angels prostrated themselves, all of them together. Except Iblis END_OF_DOCUMENT_TOKEN_TO_BE_REPLACED

Iblis in Arabic verbal root balasa بَلَسَ, meaning ‘he despaired’; therefore, the meaning of Iblīs would be ‘he/it that causes despair’. END_OF_DOCUMENT_TOKEN_TO_BE_REPLACED

The latter was a favorite theme of the Haggadists (Pesiḳ. R. vi.; Soṭah 48b; Giṭ. 68a). The later Haggadah ascribed to Moses this power to END_OF_DOCUMENT_TOKEN_TO_BE_REPLACED

The hamsa (Arabic: خمسة‎ khamsah, meaning lit. “five”) is a palm-shaped amulet popular throughout the Middle East and North Africa, and commonly used in jewelry and wall hangings. Depicting the open right hand, an image recognized and used as a sign of protection in many societies throughout history, the hamsa is believed to provide defense against the evil eye. The symbol predates Judaism, Christianity and Islam.

In Islam, it is also known as the hand of Fatima, so named to commemorate Muhammad’s daughter Fatima Zahra (c. 605 or 615 – 633). Levantine Christians call it the hand of Mary, for the Virgin Mary. Jews refer to it as the hand of Miriam in remembrance of the biblical Miriam, sister of Moses and END_OF_DOCUMENT_TOKEN_TO_BE_REPLACED

The Order of the Assassins
By Kemal Menemencioglu, 2007

Hasan Sabbah and his unconditionally obedient assassins, the fedayin, the false paradise and great library of fort Alamut, the instant death dealt by the trust of a dagger to important officials by their seemingly obedient assassin servants have been part of a legend woven throughout the centuries. In this short article, rather than give a detailed historical account of this radical Islamic sect that terrorized the Middle East for decades, as there are already a number of competent books and Internet resources that can well fulfill this task. We will suffice with an evaluation of this order that has left its mark on history.

The word “assassin” is derived from the Arabic “asessen”, END_OF_DOCUMENT_TOKEN_TO_BE_REPLACED 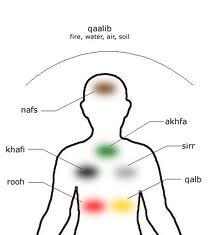 Lataif-as-Sitta (“the six subtleties”, singular: latifa) are psychospiritual “organs” or, sometimes, faculties of sensory and suprasensory perception in Sufi psychology. They are thought to be parts of the self in a similar manner to the way glands and organs are part of the body.

Drawing from the Qur’an, many Sufis distinguish Nafs, Qalb, Sirr, Ruh, Khafi, and Akhfa as the six lataif. Similar concepts in other spiritual systems include the Dantian mentioned in Chinese traditional medicine, martial arts and meditation, the sephiroth of Kabbalah, and the chakras of Indian Tantra and Kundalini yoga.

Among Sufis development involves awakening spiritual centers of perception that lie dormant in every person. The help of a guide is considered necessary to help END_OF_DOCUMENT_TOKEN_TO_BE_REPLACED