The latter was a favorite theme of the Haggadists (Pesiḳ. R. vi.; Soṭah 48b; Giṭ. 68a). The later Haggadah ascribed to Moses this power to END_OF_DOCUMENT_TOKEN_TO_BE_REPLACED

The reason why all these narratives are so similar, with a godman who is crucified and resurrected, who does miracles and has 12 disciples, is that these stories were based on the movements of the Sun through the heavens, an astrotheological development that can be found throughout the planet because the sun and the 12 zodiac signs can be observed around the globe. In other words, Jesus Christ and all the others upon whom this character is predicated are personifications of the Sun, and the Gospel fable is merely a rehash of a mythological formula (the “Mythos”) revolving around the movements of the Sun through the heavens. END_OF_DOCUMENT_TOKEN_TO_BE_REPLACED

Peter, also known as Simon and or Cephas, is said to be the Aries. Very vibrant and fiery. He was a END_OF_DOCUMENT_TOKEN_TO_BE_REPLACED

Aish, “life,” is one ancient Arabic term for bread; accordingly, it is treated with reverence throughout the END_OF_DOCUMENT_TOKEN_TO_BE_REPLACED

The Book of Tobias in the Latin Vulgate Bible, is also known in the Greek Septuagint as the Book of Tobit. Both the Semitic origin of the book and the name Tobiah – טוֹבִיָּה, which means “Yahweh is my good,” have been appreciated. The name itself is noted, for example, in 2 Chronicles 17:8, Ezra 2:60, and Zechariah 6:10. The recent discovery of five scrolls of Tobit – 4QTob – in both Hebrew and Aramaic among the Dead Sea Scrolls in Cave IV of Qumran has given the book renewed attention.

The book is a religious novel characterized as a Hebrew romance and is a captivating story. The father is called Tobit – Τωβίτ in the Greek Septuagint and his son is named Tobias – Τωβίας, whereas in this translation both father and son are known as Tobias. END_OF_DOCUMENT_TOKEN_TO_BE_REPLACED

The Antithesis
Marcion of Sinope

O Timothy, keep that which is committed to thy trust, avoiding profane and vain babblings, and Contradictions [antithesis] of gnosis falsley so called.

I. The Creator God and the Supreme God

For an evil tree bringeth forth not good fruit; neither does a good tree bring forth evil fruit. For every tree is known by his own fruit. Luke 6:43,44a

I am the Lord, and there is none else; I form the light, and create darkness; I make peace, and create evil… Isaiah 45:6,7

I create evil – This god is the author of evil – there must be another God, after the analogy of the good END_OF_DOCUMENT_TOKEN_TO_BE_REPLACED 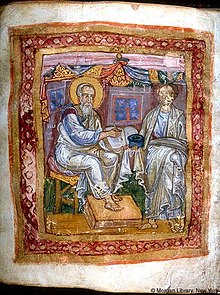 Marco was the son of the bishop of Sinep, a wealthy ship owner, and he is said to have conquered 200,000 sesterces from the Moors. Conflicts with the elders of the orthodox church arose and he was excommunicated. He fled to England where he led his own church congregation and taught the new Christian gospel. END_OF_DOCUMENT_TOKEN_TO_BE_REPLACED

The Dark Side of Halloween
By Pastor David L. Brown, 1990

It’s Halloween. To most people it seems like harmless fun. But, beneath Halloween’s candy coating is a history of diabolical evil, evil that is directly connected to the occult and Satanism, evil that you need to be warned of!

That is the purpose of this file, to make you aware of the dark side of Halloween. I have researched this topic for more than a decade and Halloween’s occultic connection is becoming increasingly evident. As I begin, let me share two first hand examples of what I am talking about when I refer to the “occult connection.” END_OF_DOCUMENT_TOKEN_TO_BE_REPLACED

Let’s go through the opening of the seals and the soundings of the trumpets for each center. Though these are done separately in the Revelation, we will do them together here for the sake of clarity and focus.

OPENING THE 7 SEALS & SOUNDING THE 7 TRUMPETS

The White Horse – Conquering – 1/3 of the Earth Burns Up

The higher self, in the form and spirit of the Lamb of God, and in coordination with God’s will, opens the seals of the body. END_OF_DOCUMENT_TOKEN_TO_BE_REPLACED

History of the Peshitta
From Peshitta.org

In reference to the originality of the Peshitta, the words of His Holiness Mar Eshai Shimun, Catholicos Patriarch of the Church of the East, are summarized as follows:

“With reference to….the originality of the Peshitta text, as the Patriarch and Head of the Holy Apostolic and Catholic Church of the END_OF_DOCUMENT_TOKEN_TO_BE_REPLACED