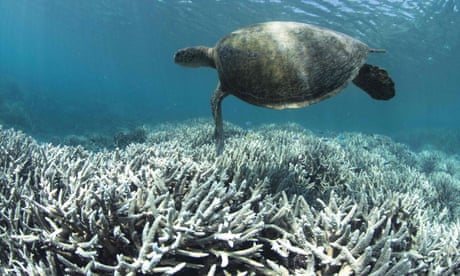 It was the smell that really got to diver Richard Vevers. The smell of death on the reef. “I can’t even tell you how bad I smelt after the dive – the smell of millions of rotting animals.”

Vevers is a former advertising executive and is now the chief executive of the Ocean Agency, a not-for-profit company he founded to raise awareness of environmental problems. After diving for 30 years in his spare time, he was compelled to combine his work and hobby when he was struck by the calamities faced by oceans around the world. Chief among them was coral bleaching, caused by climate change.

His job these days is rather morbid. He travels the world documenting dead and dying coral reefs, sometimes gathering photographs just ahead of their death, too. With the world now in the midst of the longest and probably worst global coral bleaching event in history, it’s boom time for Vevers.

Even with all that experience, he’d never seen anything like the devastation he saw last month around Lizard Island in the northern third of Australia’s spectacular Great Barrier Reef.

As part of a project documenting the global bleaching event, he had surveyed Lizard Island, which sits about 90km north of Cooktown in far north Queensland, when it was in full glorious health; then just as it started bleaching this year; then finally a few weeks after the bleaching began.

“It was one of the most disgusting sights I’ve ever seen,” he says. “The hard corals were dead and covered in algae, looking like they’ve been dead for years. The soft corals were still dying and the flesh of the animals was decomposing and dripping off the reef structure.”

It’s the sort of description that would be hard to believe, if it wasn’t captured in photographs. In images shared exclusively with the Guardian, the catastrophic nature of the current mass bleaching event on previously pristine parts of the Great Barrier Reef can now be revealed.

Coral bleaches when the water it’s in is too warm for too long. The coral polyps gets stressed and spit out the algae that live in inside them. Without the colourful algae, the coral flesh becomes transparent, revealing the stark white skeleton beneath.

And because the algae provides the coral with 90% of its energy, it begins to starve. Unless the temperatures quickly return to normal, the coral dies and gets taken over by a blanket of seaweed.

Once that happens it can take a decade for the coral to recover – and even then that recovery depends on the reef not being hit by other stressors such as water pollution.

Vevers’ images show how the once brilliant coral first turned white and then became covered in seaweed. While the hard corals are still holding their structure under the seaweed blanket, the soft corals are dying; dripping off the dead coral skeletons.

The thick seaweed is a sign of extreme ecosystem meltdown. Fish can no longer use the coral structure as shelter – blocked by the plants – and before long the coral structures themselves are likely to collapse, leaving little chance of full recovery within the next 10 years.

When the coral dies, the entire ecosystem around it transforms. Fish that feed on the coral, use it as shelter, or nibble on the algae that grows among it die or move away. The bigger fish that feed on those fish disappear too. But the cascading effects don’t stop there. Birds that eat fish lose their energy source, and island plants that thrive on bird droppings can be depleted. And, of course, people who rely on reefs for food, income or shelter from waves – some half a billion people worldwide – lose their vital resource. 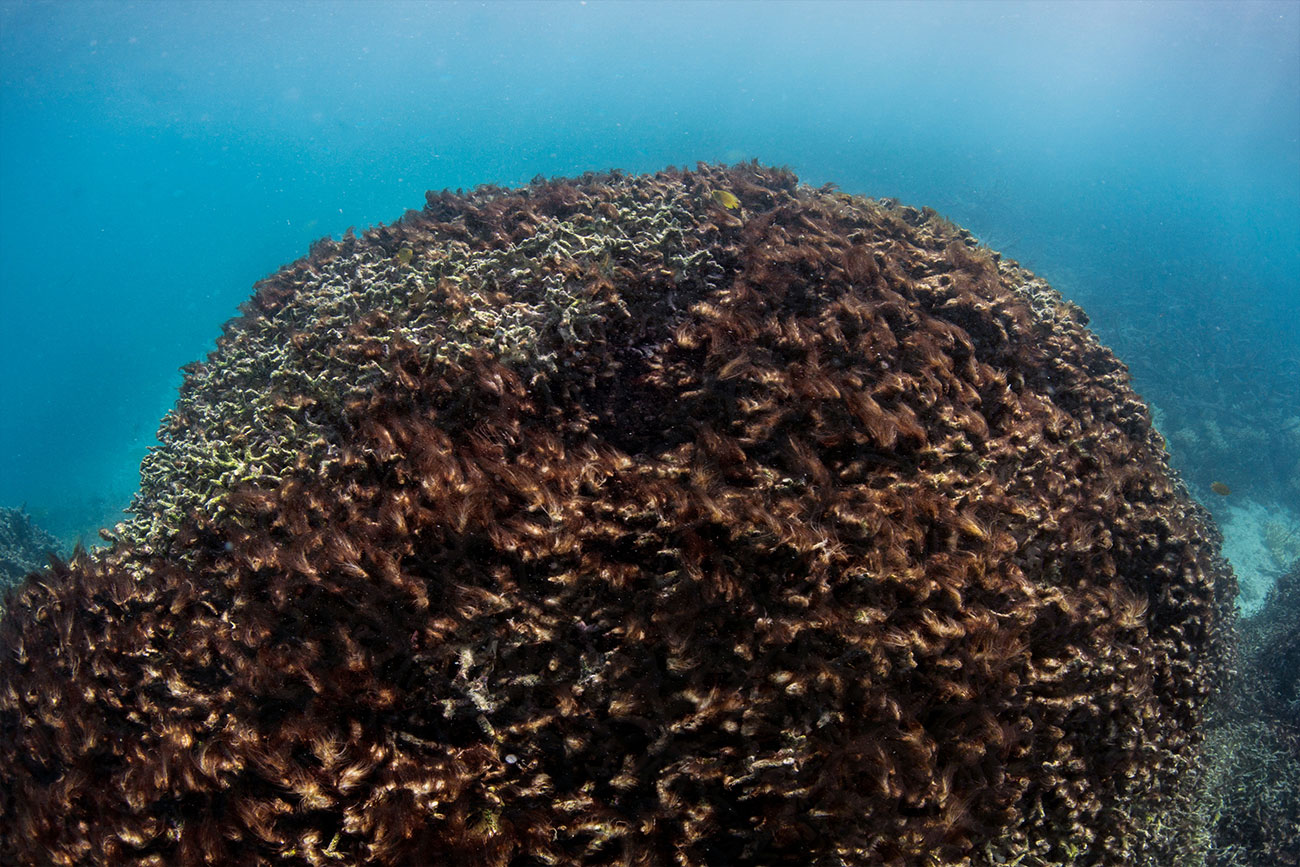 Justin Marshall, a biologist at the University of Queensland who spends a lot of his time studying the reef ecosystem around Lizard Island, says: “What happens is the colony dies, the polyps disintegrate. The algae use that as fertiliser and grow very quickly over the coral head. And at that point it’s doomed. It’s going to break up.

“It’s like a forest where plants compete for light. On the reef you’ve got this continuous competition between the seaweed and the coral. And, in the conditions we’ve got at the moment, the seaweed tends to win because it’s warm and it’s got lots of rotting stuff around to fertilise it.”

Marshall says the thing that struck him about the bleaching event this year was not just the severity but the rapidity of the death. “I was just blown away by that.”

Once the seaweed has taken hold, and the structure of the reef is broken up and lost, studies have shown that recovery is slower. Reefs can be lost forever.

What’s at stake here is the largest living structure in the world, and by far the largest coral reef system. The oft-repeated cliche is that it can be seen from space, which is not surprising given it stretches more than 2,300km in length and, between its almost 3,000 individual reefs, covers an area about the size of Germany. It is an underwater world of unimaginable scale.

But it is up close that the Great Barrier Reef truly astounds. Among its waters live a dizzying array of colourful plants and animals. With 1,600 species of fish, 130 types of sharks and rays, and more than 30 species of whales and dolphins, it is one of the most complex ecosystems on the planet.

It begins in the subtropical waters of Hervey Bay in Queensland, about 200km north of Brisbane. From there it stretches the rest of the way up the eastern coast of Australia, stopping just off the coast of Papua New Guinea.

About 2 million people visit it each year and together they contribute almost $6bn to the Australian economy.

Today there are more than 70 Indigenous groups with a connection to the reef, many of whom depend on it for their livelihoods.

Perhaps most disturbingly, what Marshall and Vevers have witnessed on Lizard Island is in no way unique. In the upper third of the 2,300km reef it’s estimated that about half the coral is dead.

Surveys have revealed that 93% of the almost 3,000 individual reefs have been touched by bleaching, and almost a quarter – 22% – of coral over the entire Great Barrier Reef has been killed by this bleaching event. On many reefs around Lizard Island and further north, there is utter devastation.

Further south, the bleaching is less severe. Since tourists usually go diving and snorkelling in the middle and southern sections, there are plenty of spectacular corals for them to see there. But they shouldn’t be fooled by that – the reef is in the midst of a major environmental catastrophe. 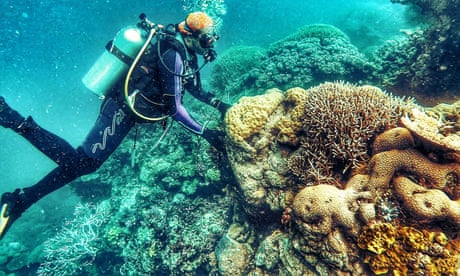