In its earliest attestations in Kikongo dialects in the early seventeenth century it was spelled “mokissie” (in Dutch), as the mu- prefix in this noun class were still pronounced, and was reported by Dutch visitors to Loango as referring both to a material item and the spiritual entity that inhabits it. In the sixteenth century, when the Kingdom of Kongo was converted to Christianity, ukisi (a substance having characteristics of nkisi) was used to translate “holy” in the Kikongo Catechism of 1624.

In the eighteenth century, the mu- prefix evolved into a simple nasal n-, so the modern spelling is properly n’kisi, but many orthographies spell it nkisi (there is no language wide accepted orthography of Kikongo).

Travelers in earlier times often called nkisi “fetishes” and sometimes “idols” because some are in human form. Modern anthropology has generally called them either “power objects” or “charms.”

Use
Close communication with the dead and belief in the efficacy of their powers are closely associated with minkisi in religion. Among the peoples of the Congo Basin, especially the Bakongo and the Songye people of Kasai, exceptional human powers are frequently believed to result from some sort of communication with the dead. People known as banganga (singular: nganga) work as healers, diviners, and mediators who defend the living against witchcraft and provide them with remedies against diseases resulting either from witchcraft or the demands of (spirits), emissaries from the land of the dead.

Banganga harness the powers of bakisi and the dead by making minkisi. Minkisi are primarily containers – ceramic vessels, gourds, animal horns, shells, bundles, or any other object that can contain spiritually-charged substances. Even graves themselves, as the home of the dead and hence the home of bakisi, can be considered as minkisi. In fact, minkisi have even been described as portable graves, and many include earth or relics from the grave of a powerful individual as a prime ingredient. The powers of the dead thus infuse the object and allow the nganga to control it.

The substances chosen for inclusion in minkisi are frequently called “bilongo” (singular nlongo, plural is also milongo) a word often translated as “medicine.” However, their operation is not primarily pharmaceutical, as they are not applied to or ingested by those who are sick, and perhaps bilongo is more accurately translated as “therapeutic substances.” Rather they are frequently chosen for metaphoric reasons, for example, bird claws in order to catch wrongdoers, or because their names resemble characteristics of spirits in question. Often the contents of minkisi were chosen because their names sounded similar to the specific goals of the nkisi and illustrated a play on words.

Among the many common materials used in the minkisi were fruit, charcoal, and mushrooms. Minerals were collected from various places associated with the dead, such as earth collected from graves and riverbeds. White clay was also very important in the composition of minkisi due to the symbolic relationship of the color white and the physical aspects of dead skin as well as their moral rightness. White contrasted with black, the color of negative ideas and concepts. Some minkisi use red ochre as a coloring agent. The use of red is symbolic of the mediation of the powers of the dead.

The minkisi “of above” were considered masculine and were closely tied to violence and violent forces. They seemed to hold a higher importance; at least according to the masculine members of the culture who wrote on the subject. Birds of prey, lightning, weapons, and fire are all common themes among the minkisi of the above. They also affected the upper body. Head, neck, and chest pains were said to be caused by these nkisi figures. Some figures were in the form of animals, most often dogs referred to as Kozo. Dogs are closely tied to the spiritual world in Kongo theology. They live in two separate worlds, the village of the living, and the forest of the dead. Kozo figures were often portrayed as having two heads. This was symbolic of their ability to see both worlds.

The purpose of the minkisi of the above was largely civil in nature. They were used to maintain order and seal treaties. 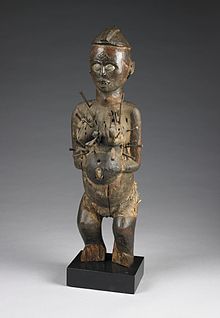 Nkondi
Nkondi (plural minkondi, zinkondi) are a subclass of minkisi that are considered aggressive. Because many of the nkondi collected in the nineteenth century were activated by having nails driven into them, they were often called “nail fetishes” in travel writing, museum catalogs and art history literature.

Many nkondi also feature reflective surfaces, such as mirrors, on their stomach areas or the eyes, which are held to be the means of vision in the “Other World.” Although they can be made in many forms, the ones featuring a human statue with nails are the best described in anthropological and scholarly literature.

Nkondi are evoked to search out wrongdoing, enforce oaths, and cause or cure sicknesses. Perhaps the most common use was the locating and punishing of criminals, by hunting down wrongdoers and to avenging their crimes. An oath taker may declare him or herself vulnerable to the disease caused by an nkondi should he or she violate the oath. People who fall sick with diseases known to be associated with a particular nkondi may need to consult the nganga responsible for mediating with that spirit to determine how to be cured.

Although nkisi nkondi have been made since before the christian era, the specifically nailed figures became the object of intensive collection in Western museums. Nailed nkondi were the targets of intense collection probably because of the drama of the nailing and the mysterious awe that the mirrored eyes had for collectors, many were made aware of their specific function. Very few new ones seem to get made today, with the exception plenty purely artistic representations.

Nkondi in the African Diaspora
Scholars are sure that African and particularly Kongo concepts and religious values crossed the Atlantic with their holders during the period of the enslavement of Africans in the Atlantic Slave trade. African religions in the Americas, particularly Palo Monte, incorporated such ideas, and they can also be found in Vodun, Santeria and other religious traditions. Robert Farris Thompson, an American art historian has been particularly diligent, and influential in identifying Kongo influences in the African descended population of the Americas. At present no early Diaspora example of a nailed nkondi has been found in the Americas, the concept of an aggressive nkisi is fairly widespread.

Modern impact
The nkisi figures brought back to Europe in the nineteenth century in particular caused great interest in stimulating emerging trends in modern art. African themes previously considered primitive or ugly were now viewed as interesting. The pieces became influential in art circles and many were acquired by art museums. The intentions of the banganga who created minkisi were practical, that is the characteristics were dictated by the need of the object to do the work it was required to do–hence the nails which caused a sensation were never seen as decorative items but as a requirement of awakening the spirit; or the gestures were part of a substantial metaphor of gestures found in Kongo culture.

Recently some modern artists have also been interested in creating nkisi of their own, like Renee Stout, whose exhibition “Astonishment and Power” at the Smithsonian Institution coupled her own versions of nkisi with a commentary by anthropologist Wyatt MacGaffey.