When man returns from Devachan, the astral, etheric and physical forces arrange themselves around him according to twelve forces of karma which in Indian esotericism are called Nidanas:

In Indian esotericism twelve forces are differentiated which draw man down again into physical existence.

These are the twelve Nidanas which work like strings, drawing us ever and again down into existence. (The meaning of Nidana is string, loop.)

There are three groups which belong together:

Vijnana is characteristic of the consciousness soul; Shadayadana of the intellectual soul and the last four are bound with the sentient soul.  These last four are present in both animal and man.
…

A person can affect his Karma to the degree in which he himself possesses Intuition; or he must receive it from the high initiates in the form of great moral laws.  Vijnana is the name used for the consciousness necessary for the overcoming of Karma.  And now let us think of a man living in the world, carrying out his actions and dying.  After his death something of him nevertheless remains here in this world which he has woven into it: Rupa, Vedana, Sanjna, Sanskara and Vijnana.  These five are the balance of his account: his personal destiny as Rupa; the destiny of the nation into which he is born, as Vedana; the actual fact of his birth on this earth as Sanjna. In addition, working with Sanskara, the desire nature, and Vijnana, the consciousness. These are the five Skandhas.

What a man gives out into the world remains as the five Skandhas in the world.  These are the foundation of his new existence.  They have progressively less effect when he has consciously developed something of the last two.  The more he has gained conscious power over Vijnana, the more does he gain the power of consciously incarnating in the physical body.  In their essential nature the Skandhas are identical with Karma.

The above was from Steiner: Foundation of Esoreticism Lecture XIV and following lectures.

Elements of the Wheel

The wheel is is driven by its hub of Three Poisons: craving or attachment, aversion or hatred, and delusion or ignorance, and by the byproduct of our actions that are motivated by these three, karma.

The segments between spokes are the different realms into which sentient beings take rebirth.

The realms relate to six distinct conditions.
In the two higher realms, they are Pride and Jealousy:

1. Ahuras or titans – Jealousy.
Pleasure and abundance like the gods, but fighting among themselves and with the gods, caused by jealousy. 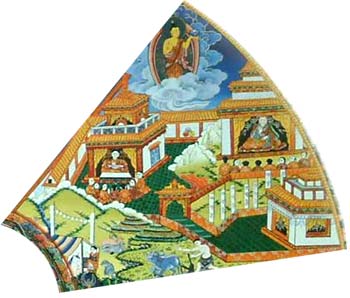 In the Realm, where it is easiest to attain Enlightenment, humans are afflicted with five disturbing emotions:

6. Manushyas or humans – Desire.
Humans suffer from hunger, thirst, heat, cold, separation from friends, being attacked by enemies, not getting what they want, and getting what they don’t want. Suffer also from general sufferings of birth, old age, sickness and death.

The lower realms are associated with Ignorance, Desire and Anger:

3. Tiryakas or animals – Ignorance.
This is the animal realm where sentient beings from whales to insects are confined in fear and ignorance. Animals suffers by being attacked and eaten by other animals, and domesticated by being slaughtered.

5. Pretas or hungry ghosts – Greed.
Lives with constant hunger and thirst. When they reach the goal it either disappears or not what they expected. It’s the realm for those who, after death, are still so attached by desire to this world that they stay as ghosts.

4. Narakas or demons – Anger.
At the bottom is the hell realm showing both hot and cold forms of torment. The Sutra of Remembrance of the True Law describes 8 different hells but they are the product of our own mind. 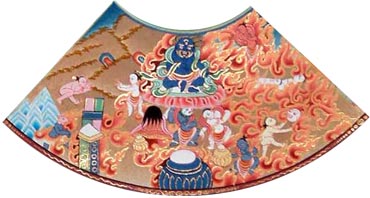 In-between states are called bardo in Tibetan. This is also the locale of consciousness while it is not embodied, as in some dreaming.

In the following drawing animals and hungry ghosts have changed position.

There are different variations on the Wheel of Rebirth. In some there is a buddha figure in each segment; in others symbols are used to represent the dharma.

The 12 Links of Causality

On the outer edge or rim of the wheel are twelve images. They symbolically refer to the factors that interact to determine the consequences of activity or karma.

Through our own minds, we create the six realms of existence and move through them. We create the realms and moves through the endless cycle known as samsara.

2 thoughts on “Twelve Nidanas Into Astrology”