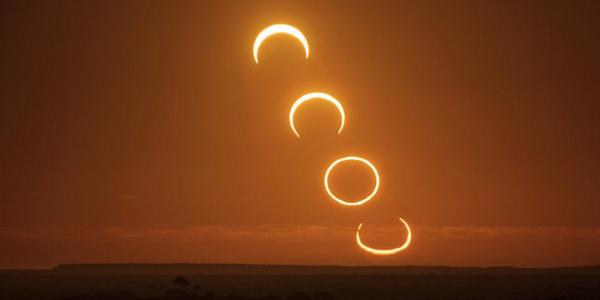 The Partial Solar Eclipse Over North America of October 2014

Watch the Moon Eat the Sun: The Partial Solar Eclipse on Thursday, Oct. 23
By Phil Plait, 2014

On the afternoon of Thursday, Oct. 23, 2014, the Moon will pass in front of the Sun. What we’ll see is a partial solar eclipse, where the Moon passes along a chord of the Sun’s face, never completely blocking it out. At maximum eclipse the Sun will look like a thick crescent, the dark disk of the Moon moving across it.

This is a very cool event, and it favors Canada and the United States; it’ll be visible in nearly the entirety of both countries. The exception is the extreme northeast, where the Sun will be setting as the eclipse starts.

Fairly Warned Be Ye, Says I

First, let’s get this out of the way: NEVER LOOK AT THE SUN WITHOUT PROPER FILTERS. You probably won’t do severe or permanent damage to your eyes by glancing at the Sun with your eyes alone, but I’d advise against it (especially for younger children, who have clearer lenses in their eyes that let through more damaging UV light) — and certainly against anything longer than a very brief glance. AND DON’T EVER EVER EVER LOOK AT THE SUN THROUGH A TELEPHOTO LENS, BINOCULARS, OR A TELESCOPE without proper filtration, and honestly, unless you really know what you’re doing, just don’t do it.

You might think sunglasses are OK, but they’re generally not. They can make it worse; they block visible light from the Sun, so the pupil in your eye widens. That can let in more harmful UV and infrared light.

If you want to see this event properly and safely—and you should, because eclipses are very cool—I urge you to find a planetarium, observatory, or local astronomy club near you and let experts handle the equipment for you. They might even have a pair of eclipse glasses you can use. […]

OK, So What Does All This Mean?

Here’s how this works. The Moon orbits the Earth once per month, and the Earth orbits the Sun once a year. The Moon’s orbit is tilted to Earth’s orbit by about 5°, so as it goes around the Earth it passes through the Earth’s orbital plane every two weeks or so. If the Moon’s orbit weren’t tilted, we’d get a solar eclipse every month when the Moon passed between the Earth and Sun. Since it is tilted, though, sometimes it’s “above” the Sun at new Moon, and sometimes “below.” We only get eclipses rarely because the Moon has to be crossing the plane of Earth’s orbit at the same time as it’s new Moon, so that it gets exactly between us and the Sun.

On Oct. 23, the geometry is close but not quite perfect. Instead of passing directly in front of the Sun, cutting straight across it, the Moon passes the Sun at an angle off-center, so it only partially blocks our star. That’s why this is a partial eclipse, and not a total one. […]

BA_141020_eclipse Animation looking down on the Earth during the eclipse. Animation by Fred Espenak/NASA

On the left is an animation showing the view from above the Earth, looking down on the U.S. during the eclipse. The curved line sweeping around clockwise is the terminator, the day/night line. The big gray distorted circle is the physical shadow of the Moon. You can see that over time it moves roughly eastward and southward, the combination of its motion and the Earth’s spin. If you live anywhere inside the path of that shadow, you’ll see an eclipse. The closer you are to the center of the shadow, the more of the Sun will be blocked.

As an overview, here’s a map showing timing and percentages of the Sun blocked. [See Source link above.] It looks daunting, but it’s not that hard to interpret once you get used to it. The more-or-less horizontal curves are marked 0.20, 0.40, 0.60 and 0.80; those are telling you how much of the Sun is blocked. I’m in Boulder, Colorado, just south of the 0.60 line, and so the most I’ll see is about 56 percent of the Sun blocked. That’s not enough to really notice it getting any darker out.

The more-or-less vertical lines tell you the time of greatest eclipse in UTC (subtract 4 hours for Eastern, 5 for Central, 6 for Mountain, and 7 for Pacific times). Boulder is just to the east of the 22:30 UTC line, and for me I’ll see the most amount of Sun blocked (what’s called greatest eclipse) at about 22:34 (16:34 or 4:34 p.m. local time).

[…] The next solar eclipse is on March 20, 2015, visible from Europe and Asia; the next one visible from the U.S. will be the great total eclipse of Aug. 21, 2017, which will cut right across the heart of the country. That one will be a big deal.