There are thousands of nsibidi symbols, of which over 500 have been recorded. They were once taught in a school to children. Many of the signs deal with love affairs; those that deal with warfare and the sacred are kept secret. Nsibidi is used on wall designs, calabashes, metals (such as bronze), leaves, swords, and tattoos. It is primarily used by the Ekpe leopard secret society (also known as Ngbe or Egbo), which is found across Cross River among the Ekoi, Efik, Igbo people, and other nearby peoples.

Outside knowledge of nsibidi came in 1904 when T.D. Maxwell noticed the symbols. Before the British colonisation of the area, nsibidi was divided into a sacred version and a public, more decorative version which could be used by women. Aspects of colonisation such as Western education and Christian doctrine drastically reduced the number of nsibidi-literate people, leaving the secret society members as some of the last literate in the symbols. Nsibidi was and is still a means of transmitting Ekpe symbolism. Nsibidi was transported to Cuba and Haiti via the Atlantic slave trade, where it developed into the anaforuana and veve symbols.

The origin of the word nsibidi is not known. One theory traces the word to the Ekoid languages, where it means “cruel letters”, reflecting the harsh laws of the secret societies that hold nsibidi knowledge.In Calabar, nsibidi is mostly associated with men’s leopard societies such as Ekpe. The leopard societies were a legislative, judicial, and executive power before colonisation, especially among the Efik who exerted much influence over the Cross River.

The origin of nsibidi is most commonly attributed to the Ejagham people of the northern Cross River region, mostly because colonial administrators found the largest and most diverse nsibidi among them. Nsibidi spread throughout the region over time and mixed with other cultures and art forms such as the Igbo uri or uli graphic design. In 1909 J. K. Macgregor who collected nsibidi symbols claimed that nsibidi was traditionally said to have come from the Uguakima, Ebe or Uyanga tribes of the Igbo people, which legend says were taught the script by baboons, although one writer believes Macgregor had been misled by his informants.

Nsibidi has a wide vocabulary of signs usually imprinted on calabashes, brass ware, textiles, wood sculptures, masquerade costumes, buildings and on human skin. Nsibidi has been described as a “fluid system” of communication consisting of hundreds of abstract and pictographic signs. Nsibidi was described in the colonial era by P.A. Talbot as a “a kind of primitive secret writing”, Talbot explained that nsibidi was used for messages “cut or painted on split palm stems”. J.K. Macgregor’s view was that “The use of nsibidi is that of ordinary writing. I have in my possession a copy of the record of a court case from a town of Enion [Enyong] taken down in it, and every detail … is most graphically described”. Nsibidi crossed ethnic lines and was a uniting factor among ethnic groups in the Cross River region.

Nsibidi was used in judgement cases known as ‘Ikpe’ in some Cross River communities. Macgregor was able to retrieve and translate an nsibidi record from Enyong of an ikpe judgement.

The record is of an Ikpe or judgement case. (a) The court was held under a tree as is the custom, (b) the parties in the case, (c) the chief who judged it, (d) his staff (these are enclosed in a circle), (e) is a man whispering into the ear of another just outside the circle of those concerned, (f) denotes all the members of the party who won the case. Two of them (g) are embracing, (h) is a man who holds a cloth between his finger and thumbs as a sign of contempt. He does not care for the words spoken. The lines round and twisting mean that the case was a difficult one which the people of the town could not judge for themselves. So they sent to the surrounding towns to call the wise men from them and the case was tried by them (j) and decided; (k) denotes that the case was one of adultery or No. 20. 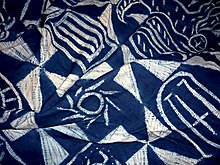 Nsibidi is used to design the ‘ukara ekpe’ woven material which is usually dyed blue (but also green and red) and is covered in nsibidi symbols and motifs. Ukara ekpe cloths are woven in Abakaliki, and then they are designed by male nsibidi artists in the Igbo-speaking towns of Abiriba, Arochukwu and Ohafia to be worn by members of the Ekpe society. Symbols including lovers, metal rods, trees, feathers, hands in friendship war and work, masks, moons, and stars are dyed onto ukara cloths. The cloth is dyed by post-menopausal women in secret, and young males in public. Ukara was a symbol of wealth and power only handled by titled men and post-menopausal women.

Ukara can be worn as a wrapper (a piece of clothing) on formal occasions, and larger version are hung in society meeting houses and on formal occasions. Ukara motifs are designed in white and are placed on grids set against an indigo background. Some of the designs include abstract symbols representing the Ekpe society such as repeating triangles representing the leopard’s claws and therefore Ekpe’s power. Ukara includes naturalistic designs representing objects such as gongs, feathers and manilla currency, a symbol of wealth. Powerful animals are included, specifically the leopard and crocodile.

Below are some examples of nsibidi recorded by J. K. Macgregor (1909) and Elphinstone Dayrell (1910 and 1911) for The Journal of the Royal Anthropological Institute of Great Britain and Ireland and Man. Both of them recorded symbols from a variety of locations around the Cross River, and especially the Ikom district in what is now Cross River State. Both of the writers used informants to retrieve nsibidi that were regarded as secret and visited several Cross River communities.

Recent nsibidi symbols with descriptions for each