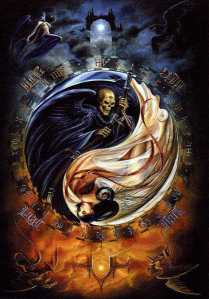 The subject of demonology is a study in itself, but its prominence in the miracles of healing in biblical times and since, make it necessary to note the evolution of the idea very briefly. There can be little doubt that the demonology of the early Hebrew period was a development from some simple form such as those we have found among the primitive races. From a conception of spirits devoid of moral character, good and bad spirits came to be differentiated.

From the classes of good and evil spirits it was possible in time to derive the ideas of gods and devils which came much later in history, by a gradual subsumption of the powers of all the good spirits under one supreme spirit to get the idea of the God of monotheism, and by a similar process the idea of monodemonism with its arch fiend, the Devil or Satan, under whose dominion all the evil spirits of the universe live and act. Much of this evolution had been accomplished before Jewish times and it must be regarded as the necessary accompaniment of a rigorous monotheism. It is possible to note within the sacred record itself the evolution of the Satan idea in proportion as the evils of life were attributed less and less to God’s judgments until finally they are laid almost wholly at the door of Satan and his emissaries.

The belief in the miraculous had not a little to do in this evolution. As we have shown, miraculous events were, as now, by no means confined to the chosen people, but in accounting for the wonders worked by others it was common to say “the gods of the heathen are devils,” thus attributing their success to Satanic rather than divine power. Thus from very early times the misfortunes, diseases, and pains of the devout have been attributed to the agency of the Evil One, but at the beginning of the Christian era and from that time on a certain sort of mental disease known as ” demonic possession ” has been especially attributed to Satanic influence. It is this class that interests us most, not only because of its prominence in the miraculous cures of all the Christian centuries, but particularly because of the psychological phenomena it presents.

Perhaps no better illustration of what “demonic possession” is and always has been, is to be found than the cases of this phenomenon that may be observed in China today. In a recent book (65) Dr. Nevins describes in detail many cases which resemble in almost every particular those described in the New Testament, and maintains that they are inexplicable except as the actual influence of evil spirits.

He cites other modern observers in India, Japan, and Europe who have observed the same phenomena. Bishop Calloway and Brough Smith have seen many cases, in Natal and Australia respectively. (15, P. 52.)

Although the attendant phenomena vary widely there is a general similarity among all races. Some of those affected are wild and unmanageable, leap, and toss their arms about ; others are more calm ; some entirely unconscious while visibly possessed. The personal appearance is nearly always changed ; in some there is palpitation, peculiar contractions, foaming.

In nearly every case a second personality appears which personates a god, genii, the spirit of a deceased relative, or some animal. The first symptoms of the disease often occur in dreams and many times a fit of anger or grief is the first sign.

In most cases the “demon” comes in spite of the most violent opposition on the part of the person, but there are those who voluntarily invoke the spirit’s presence in order through its power to make revelations by clairvoyance, clairaudience, or by a Chinese variety of planchette. Numerous other powers are claimed for the possessed such as speaking with tongues or in poetic form, singing, when otherwise they could not, and evidencing unusual physical strength. In some cases they are very destructive; they rob, steal, curse food and wells, put filth in eatables, and cause the money of the household to disappear; while if they are worshipped and propitiated all evil manifestations disappear and the family receive unusual favors instead.

The Chinese system of treating possession is in accord with their beliefs regarding it. A priest is called in who makes use of one or several of the following means: sacrifice, chants from the sacred books, prayer, offerings of money, begging or exorcism, magic spells, incantations ; or by pinching, sticking with needles, by the use of peach or willow branches, charmed water and other similar means he drives out the spirit and confines it. If the priest-doctor fails they resort to spiritism and all its attendant phenomena of rappings, table tipping, planchette writing; and revelations of suitable charms or remedies to be used are as familiar to them as to our spirit mediums and our Indian medicine men. Confucianists, Taoists and Buddhists alike make use of such means.

Of recent years Christian converts have been most successful in casting out these spirits by prayer and in the name of Jesus. In many cases a profession of faith is said to have been sufficient to relieve the sufferer of all further trouble. Space forbids the quoting of any of the numerous detailed descriptions of individual cases given by Nevins, interesting as they are as data for a study of comparative psychology and pathology. But one may say that almost every phase of the so-called “demon” possession of China, as it appears in the descriptions of Dr. Nevins, can be paralleled in any large institution for the insane. Any one who has had experience even in clinical demonstrations with such patients must at once admit the similarity.

The periodic recurrence of attacks, the phenomena of double personality, sudden outbreaks of mania and as sudden returns to apparent normality, changes in voice, peculiar losses of control over the natural movements, or variations by habit or fixed ideas of functions naturally reflex, as breathing, etc., peculiar claims to and even real possession of unusual powers, — all these and many more of the manifestations we find repeated in every insane hospital. The differences are practically nil except those due to religious beliefs, superstitions, and race characteristics shown equally well in normal individuals.

A more careful study of demonology in a comparative way by men of anthropological and psychological training will no doubt make a valuable contribution to our knowledge of the human mind and its variation under environment, education, and the influence of dominating religious and superstitious ideas, but there can be no question that it will be termed simple insanity.