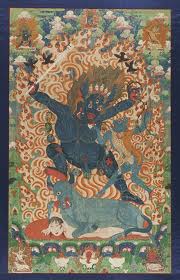 Yama is the much-feared Hindu god of death who lives in his gloomy palace Kalichi situated somewhere in the nether regions or the Hindu Patala. He is the regent of the Southern quarter of the compass. Yama has a number of attendants to assist him in his many tasks. In his palace he keeps a register called the “Book of Destiny” in which each person’s span of life is recorded. This is maintained by one of the god’s attendants and the servant is predictably as gloomy of countenance as his master. When a person’s span of life is over Yama sends some of his more robust attendants up to earth to haul the person down to his palace.

Sometimes, when things are not lively enough down in Kalichi, Yama himself ascends riding on his buffalo, his steed of choice, and carrying in one hand a heavy mace to strike down the victim with and in another a noose to drag the hapless person down to his palace. There the dead man or woman’s soul is made ready to pass in judgment before Yama, who sits on his throne in a great hall in his terrifying palace. Chitragupta, one of Yama’s better-known attendants, reads out of a great book the sum of the soul’s virtues and sins. Yama judges the dead person on this basis and he assigns the soul accordingly to either one of his many hells, a mete fate for inveterate sinners, or to the abode of the Pitris. (The Pitris are the forefathers and their abode is tantamount to heaven to a Hindu who is reconciled with his or her forefathers in this place. Only a very virtuous person is allowed to enter the abode of the Pitris.)

If the person has been rather moderate on Earth and is neither a great sinner nor a great virtuoso then he or she is sent back to Earth by Yama to have another try at striving to enter the abode of the Pitris. Since most Hindus are not fond of dying many ways have been devised to try and elude Yama and his untimely summons.

One such well-known way is to narrate the name of one of the three Hindu gods who form the Hindu Triad — Brahma, Vishnu and Shiva. Unfortunately this is not very effective over an entire lifetime as no-one can keep narrating one name all one’s life. Thus, even Hindus die, like others of other faiths. Nevertheless, over Hinduism’s long and illustrious history, there have been a few notable cases in which certain enterprising individuals have utilized the above-mentioned strategy to try and eschew Yama and his fateful noose. We shall now examine a few of these cases to determine how successful these individuals were.

One Ajamila, a notably wicked person of his times, spent his entire life with utmost iniquity. He had a son named Narayana — one of names of Vishnu, one of the Hindu Triad. When Ajamila lay on his deathbed he called out to his son to bring him his last drink of water. Vishnu heard this and believing that He was being called upon to save the man’s life He sent down His emissaries to help Ajamila. When Vishnu’s attendants reached Ajamila’s abode they found that Yama had also sent up his. A quarrel ensued as to who was more liable to Ajamila. Since Vishnu was one of the Triad His attendants prevailed and Yama’s had to go back, crestfallen possibly from having been deprived of their victim. Ajamila was thus saved but, somehow, he reformed himself and became so virtuous that, later, when he died, he attained salvation.

There is also another notable case of a robber who was rather inadvertently saved because Yama mistook him to be an ardent devotee of Shiva, another of the Hindu Triad. He had one singular habit. Day or night, whenever he was awake, he was in the habit of occasionally shouting out Ahara (Bring the Booty) and Prahara (Beat them up). Fortunately for the lusty robber “Hara” is another name by which Shiva is known and worshipped.

One day, as the robber lay dying in old age, he kept on feebly muttering his favorite words — Ahara and Prahara. Yama, hearing these and mistaking them for Shiva’s other name, thought that the robber was calling out to Shiva to save him. Thus, Yama dared not take the malevolent man away. Shiva became aware of this and appeared before the dying robber. He offered to save the man’s life if he repented for his sins. The robber agreed to this and began leading a virtuous life thereafter till his death when, though he was not granted salvation, he was allowed by Yama to be reborn as a king, which is by far not a bad faith for one who had spent most of his previous life robbing others.

The next instance we have of a notable evasion of Yama is the case of a real devotee of Shiva. Markandeya, not the famous Hindu sage of the same name, was an ardent devotee of Shiva. He lay by the lingam all day worshipping and praying. Unfortunately Markandeya’s life span, as written in Yama’s Book of Destiny, was only a few years. When that time ended Yama sent his attendants up to get Markandeya but they, seeing the faithful man worshipping at the lingam, dared not touch him.

They went back. Yama was inexorable in his resolve this time to get his victim and himself came up and tried to pry Markandeya away from the lingam to which he was then clinging. When Yama found that he could not get his victim to release the lingam he gathered his noose and flung it over both Markandeya and the lingam and started to drag them down to Kalichi. Shiva became aware of what was going on and became incensed at Yama’s effrontery. He came down from Kailash, His abode, and kicked Yama to death. Markandeya was saved. All living creatures heaved a sigh of relief at this. With Yama himself dead there was no dying now. Everyone became immortal. But this was not to be.

Soon the living places became so crowded that living itself became a hellish experience. Besides, with no fear of dying, everyone began to do just what he or she pleased. There was now no sense of right and wrong and no sin and virtue. So the gods got together and implored Shiva to restore Yama to life and to his grisly duties. This was done and everyone everywhere again had to go about cautiously, with the names of the Triad constantly at their lips to ward off Yama just in case their life span was over.

Yama is depicted as a man with dark green skin, wearing blood-red robes and with coppery eyes staring out of his grisly face. He rides his buffalo when he is traveling and he takes his mace and noose everywhere just in case there is an emergency and someone has to be cut off in the midst of his or her life.