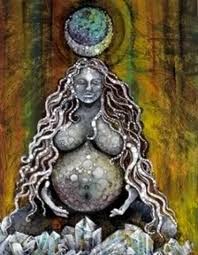 Bail (m) – Supreme God, giver of life – Dilling of Sudan – using the Arro in the next world to perform his work in the world of the humans

Bakulu (m) and Bakala (f):  Loa of the woods – Vodou of Haiti – also deemed Loa of ruin and misfortune

Bateta and Hanna – Soko of Congo

Brise (m) – God of the woods and hills – Haitian Vodoun and Yoruba of Nigeria – protective of children, able to take form of an owl

Bromu, Boromu, and Brosia, Boronisa – twin Guardians of the secrets of Oduduwa – Yoruba of Nigeria – Bromu is in charge of desiccation and drying, Brosia is in charge of tornadoes and decimating specific areas

Buadza – God of the wind – Ga of Ghana

Chi – Spirit of humans – Igbo of Nigeria – after Chukwu and Ala, the most important divinity

Chide, Chido (m) – Creator God, Sun God associated with celestial affairs, God of the underworld – Jukun of Nigeria – known as Ama (f) when below in the earth

Chukwu (Chi Ukwu) (-): Supreme God – Igbo of Nigeria – Chukwu is not believed to have human attributes, but is often referred to as “He”

Da, Dada – sacred Serpent who encircles the Earth to protect it – Fon/Daxome – embodied by the Atmosphere for many modern adherents [See Damballah]

Dodo (m) – Ancient Deity, father of the cardinal directions, but an Evil Spirit (or ogre) and embodiment of the dead – Hausa of Niger and Nigeria – wife Damina, Goddess of vegetation

Dya and Gla – the forces of Creation – Bambara of Mali